Since its introduction as a parallel, agent-based modeling tool in the early 90’s, StarLogo has gone through several iterations that aim to make it more approachable to first-time programmers. The current version under development, StarLogo Nova, employs a blocks-based program editor and 3D visualization engine, all available online, and is used by tens of thousands of students across the United States. Rather than considering concurrent and/or distributed programming to be an advanced topic beyond the reach of beginners, StarLogo Nova is designed to give new learners immediate access to these concepts. Indeed, our current research shows that engaging with this sort of computational modeling in a well-designed curriculum increases student understanding of complex adaptive systems, providing a unifying lens through which to view many other disciplines. This talk will give a brief history of StarLogo, and then examine the language features, metaphors, and patterns of thought that enable novices to meaningfully engage in concurrent and distributed problem-solving during their first computing experiences in StarLogo Nova.

Daniel Wendel has led the design and development of StarLogo Nova and StarLogo TNG at the MIT Scheller Teacher Education Program since 2007. His research interests revolve around meaningful computation experiences for students, with a particular emphasis on the StarLogo-style integration of computation, modeling, and complex adaptive systems. Wendel has also led the Imagination Toolbox project, training teachers to integrate computational thinking into their classes, since 2009, and has spent hundred of hours observing students’ first experiences with programming in schools. He is currently involved in two projects, Teachers with GUTS (NSF) and Model BEST (NSF), that aim to further study the integration of computational modeling into classrooms, and the impact that can have on student learning. 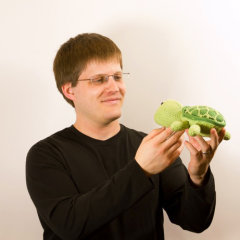